This year’s Henner Prize of the Czech Neurological Society for the best publication by young authors under the age of 35 was awarded to neurologist Ondřej Volný, M.D., Ph.D.

What does the award by the Czech Neurological Society mean to you?

It is a great honour for me. Professor Henner is the father of modern Czech neurology, who raised it to a higher level. Moreover, it is an award directly from a professional society, i.e. people who have tangible results behind them and work to make Czech neurology visible in the world.

What is the focus of the publication for which you received the Henner Prize?

There are various treatment options for stroke. We can administer a drug to dissolve the blood clot that caused the blockage of the cerebral artery. Or we can remove it with a catheter and use what’s called a mechanical thrombectomy. In 2015, studies were published that showed that mechanical removal of a cerebral artery blockage is highly effective. Although we were not involved in these studies, we decided to compare their results with data from the Czech registry. We then published comparable findings in 2016. Two years later, I went to Calgary to work as a physician in the ictal unit. During my time there, I decided to focus my research on a group of patients not included in those studies. Patients who had a cerebral artery occlusion but were not suffering from a severe neurological deficit. We put our heads together with Prof. Hill from Calgary and Prof. Mikulík and created a new study design. In this international study, we compared different therapeutic approaches. While in Calgary the patients were treated pharmacologically, in the Czech Republic they were treated with mechanical thrombectomy. The study contributed additional pieces to the mosaic of how to treat these patients.

What was most interesting for you in working on this study?

Around 30 co-authors were involved in the research. For me, this was the largest study I have been involved in so far. The research was also unique in that we analyzed the data using a more advanced statistical method and ran into the limitations of the software. We eventually had to contact the manufacturer to put in the algorithm we needed. Finally, the publication appeared in the prestigious journal Neurology.

What were your research beginnings?

I got into clinical research about 10 years ago while studying medicine. I started going to Prof. Mikulík for his night services and we wrote my first article, which incidentally became the most downloaded article of the journal Czech and Slovak Neurology and Neurosurgery after its publication. After finishing medicine I became a PhD student. I started with a simpler project, thanks to which Professor Mikulík helped me arrange a research internship at the Cerebrovascular Program in Calgary, Canada. Here, I was subsequently offered the opportunity for a clinical fellowship, which I completed in 2019. The opportunity for international education advanced my research knowledge immensely. The awards I have received, such as this year’s Henner Prize, are a pleasing testament to this. Upon my return, I opted for an attractive job offer at the University Hospital in Ostrava, although I continue as a member of the ICRC Cerebrovascular Research Team, where our collaboration has been very productive. 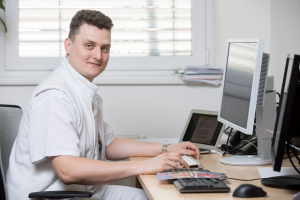