Mgr. Martin Toul from the Loschmidt Laboratories of the Faculty of Science MU, RECETOX and the International Clinical Research Centre at St. Anne’s University Hospital in Brno (FNUSA-ICRC) has discovered in his work a connection that increases the previously recognized effectiveness of staphylokinase in dissolving blood clots up to ten thousand times. This breakthrough discovery could help to find new and more effective drugs for acute stroke patients.

Two approaches are currently used to treat stroke. The first is mechanical, where the blood clot is removed using a catheter, while the second is biochemical, where the thrombus is dissolved using a drug. The first method is more demanding in terms of technical equipment and also in terms of thorough training of personnel, while the second is easier to apply, but it has its limits too, especially in terms of efficacy and the cost of the substance administered.

Currently, the most widely used drugs contain a protein called alteplase as the active substance. Although this has a relatively selective effect directly on the blood clot, it has limited efficacy and has a higher risk of thrombus recurrence or unwanted bleeding. Also for this reason, agents that dissolve the thrombus faster and without the risk of side effects are constantly being sought.

A protein produced by staphylococcus bacteria, staphylokinase, has been considered as one suitable candidate. Staphylococcus is found on the skin or mucous membranes of every person. However, if the body is weakened or the immune system is compromised, it can cause an infection that is difficult to treat. Although the immune system tries to isolate these bacteria by using a protective barrier similar in composition to that of a blood clot, staphylococcus can break it down with staphylokinase.

However, staphylokinase did not appear to be a suitable candidate for the treatment of stroke due to its low efficacy. But this could now change with the work of Martin Toul, who has shown that the efficacy reported so far is actually many times – up to 10 000 times – higher. “We are working on research and development of substances effective in stroke within the Stroke Brno project and our research has been supported by the Ministry of Education, Youth and Sports with a four-year INBIO grant of CZK 100 million,” said Toul.

The link that could change the perception of staphylokinase in treatment came about unplanned. “We were testing proteins similar to staphylokinase, and we needed to get baseline data to use as a basis for comparison. We didn’t just want to rely on data reported in the literature; we wanted to verify previous observations in the lab. We went more in depth and found that the staphylokinase activity was actually quite different,” Toul described.

“Everyone was looking at the activity as a whole. But we looked at the individual steps of the mechanism and found the limiting one. As a result, we found that we don’t need to improve staphylokinase at all in terms of dissolution activity, but just focus on its binding efficiency, which is easier to do,” Toul emphasized. Thus, future research will aim to find proteins with improved binding properties so that the overall efficiency is as high as possible. “Using protein engineering methods, we plan to design thousands of variants, test them in our Loschmidt laboratories and send the most suitable candidates to our colleagues at the Institute of Biophysics of the CAS, with whom we also collaborate within the Stroke Brno platform,” outlined Martin Toul’s future plans.

The first author of the thesis Mgr. Martin Toul is a student of Masaryk University and a researcher of the Protein Engineering team (FNUSA-ICRC) in Loschmidt laboratories under the supervision of Prof. Zbyněk Prokop and Prof. Jiří Damborský. In 2020, he was awarded a Fulbright Postdoctoral Fellowship for PhD students, thanks to which he spent a semester at the University of Texas at Austin in the group of Prof. Kenneth A. Johnson. 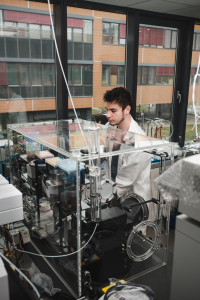 February 21, 2022/by Jiří Erlebach
https://www.fnusa-icrc.org/wp-content/uploads/2020/07/Datový-zdroj-3-300x148.png 0 0 Jiří Erlebach https://www.fnusa-icrc.org/wp-content/uploads/2020/07/Datový-zdroj-3-300x148.png Jiří Erlebach2022-02-21 16:42:512022-02-23 12:45:57Potential stroke cure is 10,000 times more effective than thought
#WomenInScience – nothing unusual in our centre International cooperation and European funding paved the way for successful...
Scroll to top
This website uses cookies to ensure the operation and traffic analysis. If cookies are restricted, not all website functions may be available. Setting
Accept all Reject
Setting