You are here: Home1 / News2 / Kardiovize is Co-leading a Consortium of Cardiometabolic Risk Factors ...

An important research team within the International Clinical Research Center of St. Anne’s University Hospital Brno (FNUSA-ICRC) is Kardiovize. It is a cardiovascular prevention program in Central and Eastern Europe based on population analysis. One percent of the population of the city of Brno participates in it and the data from the research have a large international overlap. Its importance is also confirmed by the head of the research team, Dr. Juan Pablo Gonzalez Rivas: “Cardiometabolic risk factors, including obesity, diabetes, hypertension and dyslipidemia, are the leading cause of death and disability worldwide.”

However, this burden affects populations disproportionally, „It is very important to understand how to stop the consequences of cardiometabolic risk factors globally, and the heterogeneity of the drivers that creates the disease varies considerably across regions, cultures, and ethnic groups, for this reason, it is mandatory to approach the understanding of this problem using a multicultural perspective“, says Dr. Gonzalez Rivas.

This fact was also the reason for the creation of the international consortium METRICS, which was established last year. Kardiovize is a founding member of the consortium and Dr. Gonzalez Rivas is its secretary. METRICS is the result of a long-term collaboration with a group of scientists from Venezuela, led by Ramfis Nieto-Martinez and Dr. Jeffrey I. Mechanick of Mount Sinai, NY, USA. “We have published sixteen articles with this group in the last seven years,” said Dr. Gonzalez Rivas. “We meet regularly every month and continue to actively cooperate on our projects.”

Currently, the consortium has 29 members from four continents, such as Masaryk University in Brno, Universidade Federal Fluminese in Rio de Janeiro, Charles University in Prague, Harvard School of Public Health in Boston and the Mayo Clinic. These are not only medical and PhD students, but also top scientists. “We are very proud of our diversity and I would like to emphasize that this is not a closed society, anyone can join us and will be welcome,” added Dr. Gonzalez Rivas. Five members of Kardiovize itself are involved, each of whom presented at least one project related to public health issues last year, and another five projects are currently being prepared.

We asked Dr. Gonzalez Rivas – can a medical student from Masaryk University in Brno, for example, get involved in the activities of the consortium?
Of course, one of the core values we have in our research team is to support junior researchers and interns. For example, Anna Zimovjanová, one of our interns, approached us with the idea of a project aimed at evaluating the impact of social determinants on the mental health of medical students. Both mental health and the social situation are among the risk factors associated with cardiovascular disease. So we in Kardiovize helped her with the preparation of the project and she also introduced it to the members of METRICS. They provided it with feedback and in June she will present a supplemented proposal for the implementation of this project and its implementation in seven countries, which we consider a huge success. This is exactly the goal of the cooperation between the Kardiovize team and the METRICS consortium, ie to offer a platform for the development of our own projects. I would just like to add that Anna Zimovjanová is also a recent research assistant in our team while studying at Masaryk University.

More information about the METRICS consortium can be found on the website. Alternatively, you can contact Dr. Gonzalez Rivas (juan.gonzalez@fnusa.cz). 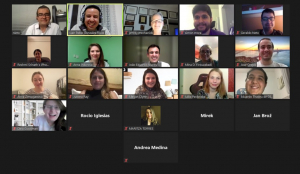