Kardiovize research team of the International Clinical Research Center of St. Anne’s University Hospital Brno (FNUSA-ICRC) has published a new publication dealing with visceral fat. This is the first such published study in Europe.

The new Kardiovize publication deals with visceral fat, ie fat stores that are stored around vital organs. “It turned out that we can’t use the values of visceral fat defined by colleagues in the USA or Japan to determine cardiovascular risk. The local population has very different values, “said the head of the FNUSA-ICRC Kardiovize research team, dr. Juan Pablo Gonzalez Rivas. The publication was published in the professional journal Obesity Research & Clinical Practice.

A young researcher, Anna Polcrová, who studied Nutritional Therapy at the Faculty of Medicine of Masaryk University, Social Epidemiology at the Faculty of Science of Charles University and continued her studies at Masaryk University while working in the Kardiovize team. “Body fat can be stored in the human body in various areas. In principle, we distinguish between subcutaneous fat, which is located under the skin, and visceral fat, which is located inside the abdominal cavity and surrounds our organs. It is the placement of fat stores in the body that significantly affects its impact on our health. Previous research has found that fat placed under the skin is not as risky as visceral fat, because excess visceral fat is associated with metabolic abnormalities such as insulin resistance, diabetes II. type, increased risk of thrombosis or endothelial dysfunction, ie disorders of the inner lining of blood vessels. ”

And how is the level of visceral fat in the human body actually measured? A generally accepted standard method is computed tomography, which is, however, relatively expensive and exposes the patient to radioactive radiation. “We used bioelectrical impedance analysis in the patients in the study, which has the advantage of simplicity, speed and also lower costs. It is non-invasive and shows a strong correlation with the values measured by computed tomography. The bioimpedance method is based on weak electricity flowing through the body and measurements to calculate impedance (resistance), which allows to describe the composition of the human body, including areas of visceral fat. Although it may sound dangerous, this method is completely painless and can be used for people of any age. The only contraindication is the presence of a pacemaker or pregnancy, “added Anna Polcrová.

To create this analysis, the researchers used the data of 2052 participants in the long-term study Kardiovize, which is ongoing at FNUSA-ICRC. Since 2013, it has been monitoring the health of a sample of the Brno population aged 25-65, and the second wave of examinations will be completed this year. “Our results showed that the limit values of visceral fat related to cardiometabolic risk in the Czech population are different in comparison with previous studies in other populations. We observed that 90 cm2 limits in men and 109 cm2 in women were associated with the presence of cardiometabolic risk factors including high waist circumference, increased blood pressure, decreased HDL-cholesterol (so-called “good” cholesterol), elevated triglycerides and elevated glucose levels on an empty stomach. In addition, men had a higher risk of cardiometabolic complications with lower visceral fat levels compared to women. Briefly, the results showed that the distinction between high and low visceral fat and associated cardiometabolic risk must be based on population-specific cut-off values, while taking into account gender differences. The amount of adipose tissue in the body, which is assessed as the norm for women, can be considered risky for men. And it works the same way among members of different ethnicities, “added Anna Polcrová.

It should be added that a new study by the Kardiovize research team was also selected for publication in the form of an e-poster at the prestigious European Congress on Obesity. A total of 330 e-posters were received (three from FNUSA-ICRC), but only 20 of them were selected for oral presentation, two of them from FNUSA-ICRC. Among them is also the work of Anna Polcrová. 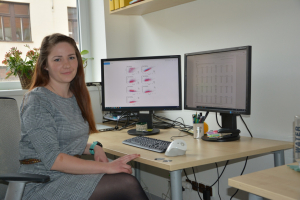 May 13, 2021/by kapcarova
https://www.fnusa-icrc.org/wp-content/uploads/2020/07/Datový-zdroj-3-300x148.png 0 0 kapcarova https://www.fnusa-icrc.org/wp-content/uploads/2020/07/Datový-zdroj-3-300x148.png kapcarova2021-05-13 10:16:102021-07-13 12:19:21Study: European visceral fat has different cut-off values
Kick-off Meeting of A4L_ACTIONS Project Kardiovize is Co-leading a Consortium of Cardiometabolic Risk Factors METRI...
Scroll to top
This website uses cookies to ensure the operation and traffic analysis. If cookies are restricted, not all website functions may be available. Setting
Accept all Reject
Setting